"I could not see any steps or path going up the side of the hill so I suppose it is not possible to climb to the top unless you are a skilled mountaineer with all the right equipment. It is a spectacular limestone outcrop located close to the highway between the towns of Jeli and Belimbang." 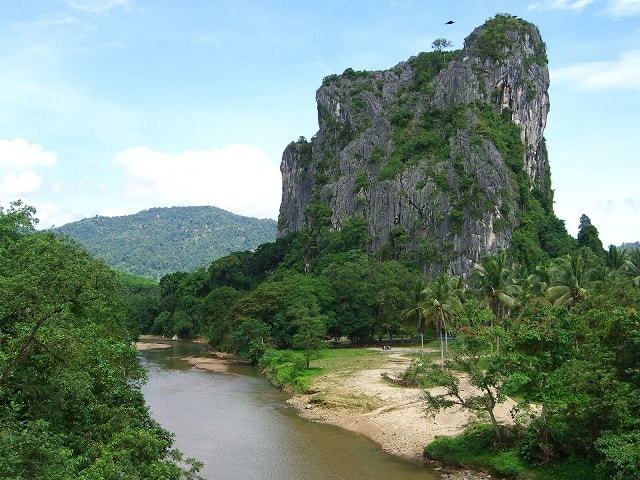 You cannot miss Gunung Reng if you are driving on the East-West Highway. Gunung Reng is located near the East-West highway at Jeli and is approximately 15 minutes from Kampung Kalai. Gunung Reng can be seen as a huge rock because it exists in an area that has no continuous series of mountains. According to the locals, Gunung Reng is a piece of rock brought down by God to destroy a village. This happened due to the evil and cruel activities by the past residence of the village and they deserved to be punished and vanish from the face of Earth.

Even from the outside the screeching of bats are quite noisy. Inside it's bigger than you'll expect. The stench of bat droppings is quite overpowering and the floor of the cave is slippery with green and black guano. The screeching noise seems to come mainly from a kind of chimney which disappears up into the dark inner recesses of the mountain.
You'll expect the cave leads deeper into the hill and I think there are other caves to be explored, but since there was no guide available at my visit. I was not keen to go any further on my own without a torch.
The cave also have the unique structure of stalactites and stalagmites which are look like anthropoid living and things. The fact is, certain rock formations, granite / limestone mountain are the same as found in Gua Musang. 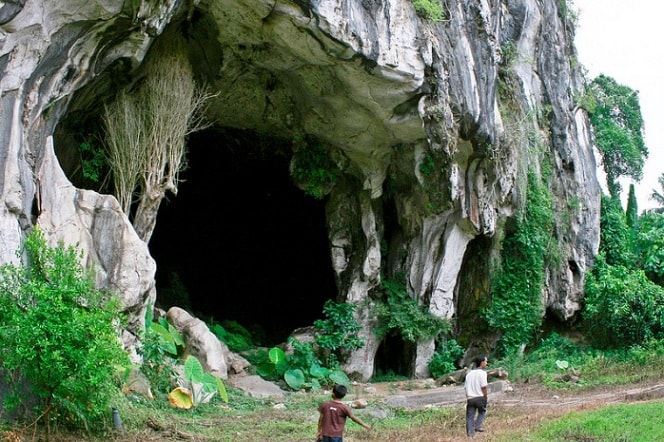 Outside the cave is a badly-weathered Tourism Malaysia information plaque that provides some information on the legend which surrounds this mountain.

"According to folklore there used to be a village on this spot called Kampung Tok Tala. Around 1400 years ago there was some serious partying going on lasting 7 days and nights which culminated in a contest where a dog was pitted against a cat at a time when the villagers should have been praying.
In divine retribution against this scandalous behaviour and animal cruelty this mountain (Gunung Reng) was swept up in a storm from its original location several miles away and dropped on top of the village, the remains of which are, to this day, lying buried under the mountain (People believe that the stone (Gunung Reng) comes from Perak)."

The legend is probably a tale and has attracted many visitors to Gunung Reng to enjoy the beautiful nature and experience the clear and clean water from the river. Research in and around Reng Mountain has unearthed evidence that the mountain was once inhabited. Today, the limestone caves of Reng mountain has become a tourist attraction.

Kelantan fondly knows as 'THE LAND OF CIK SITI WAN KEMBANG' for its association with this legendary warrior queen and her daughter, Puteri Saadong. Their legends be traced to many other places in this sate. Bukit Marak, about 20 km from Kota Bharu, was said to be Puteri Saadong's dwelling place while Padang Alban is where her husband was laid to rest.

There is no entry charge and no gate to the cave entrance so I guess you can go at any time. At dusk you might be treated to the sight of thousands of bats emerging from the cave to look for their supper. 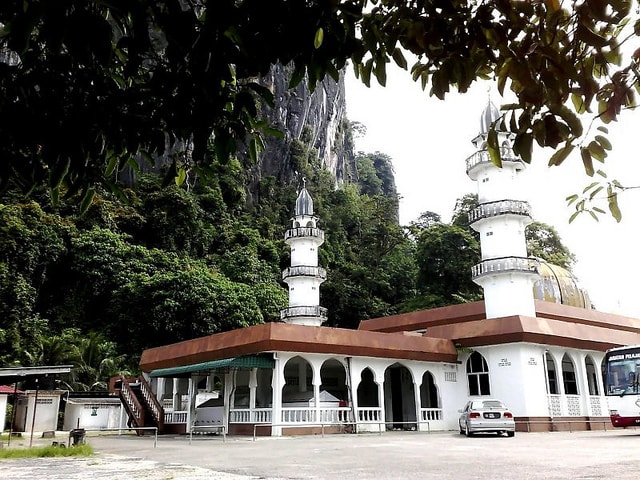