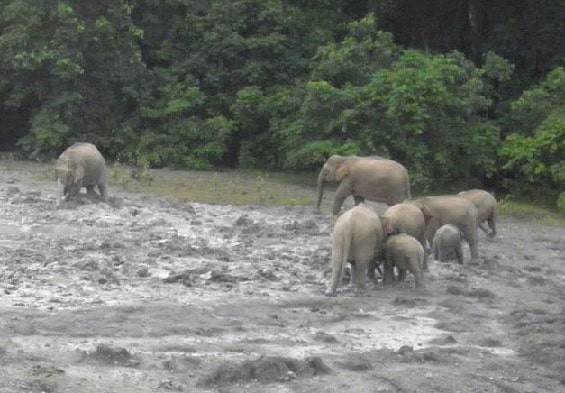 There are 9 trekking routes and a number of backup trails used for 4-wheel drive night safaris. The longest trail is the Gibbon Trail (1.7 miles) that leads from the resort to Lipad waterfall leads. A “trail” is a marked path. However, you are only allowed on the trails with a guide. The other routes are:

Unique to this protected area is the existence of seven active mud volcanoes. The seven mud volcanoes in Tabin (some the size of a football field) are important watering holes for the area's wildlife due to its high mineral content. Wild animals often visit the mud volcanoes in the early mornings, leaving their stop in the form of paw prints on the soft gray mud.
There is a watchtower at the Lipad mud volcano and most tours visit the area to search for animals in the wild or to look for animal footprints in the mud.
Natural mud volcanoes are a major natural attraction for animals looking for salt, and these have become a bonus for visitors who come to see wildlife.

Situated in Lahad Datu, Tabin Wildlife Resort is the ideal point of departure for your excursions in Lahad Datu. From here, guests can enjoy easy access to all that the vibrant city has to offer. For those of you who want to venture out, Tabin Wildlife Sanctuary is just some of the attractions available to visitors.
At Tabin Wildlife Resort, the excellent service and superior facilities ensure an unforgettable stay. This hotel has many facilities that will convince even the most demanding guests.
Step into one of the 20 inviting guestrooms and escape the daily stress with a wide range of amenities including non-smoking rooms, air conditioning, desk, balcony / terrace, fan. The complete list of recreational activities is available at the hotel, including garden. Whatever your reason for visiting Tabin Wildlife Resort, the Tabin Wildlife Resort is the perfect venue for an exhilarating and exciting break away.